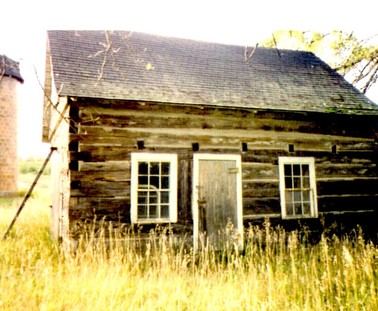 Hope you enjoy this image of the log cabin when it was on the farm, before the cabin was moved up near the lighthouse.  I believe Burtons were the last residents of the farm.  The farm was located across from the DNR’s East Bay boat launch. The house and barns were demolished and now the land is part of Underwood Farms.


​
​
In 1992, the residents of Old Mission Peninsula, a finger of land jutting into Grand Traverse Bay north of Traverse City in northern Michigan, came together to save the Hessler Log House, which was threatened with demolition.  The house, completed in 1856, sat on land that was being developed.

A group of Peninsula citizens formed the historical society with the primary purpose of preserving the log house.  In conjunction with Peninsula Township and other community organizations,the society raised the money necessary to move the structure to Lighthouse Park at the extreme tip of the peninsula and once it was there it was restored.  It now stands as a proud reminder of the area's past, visited by thousands each year who can walk through its door and from a viewing area look back to frontier life in the middle of the nineteenth century.

The society continues to maintain the house, reglazing its windows when needed and trying to figure out a way to discourage the local porcupines from gnawing on its timbers.  On the last Sunday each June,  the house, along with the lighthouse nearby  anchor our celebration of the statewide Log Cabin Day, complete with a wide variety of craftspeople demonstrating how things were made when the Hesslers constructed their house.

But saving this structure was only the beginning of our society.  We continue to strive to preserve local history however and wherever we can.  We played a major role in the preservation of the Dougherty Mission House, built by the Reverend Peter Dougherty some years before the log house. Dougherty established the mission, after which the peninsula is named. Members formed the 501C3 Peter Dougherty Society which oversees the management and now nearly complete restoration of the 1842 house.

To work toward this mission, the society meets in the old town hall on Center Road, the first Thursday every month at 7 pm. Meetings are open to the public and one and all who share our devotion to historical preservation are very welcome.