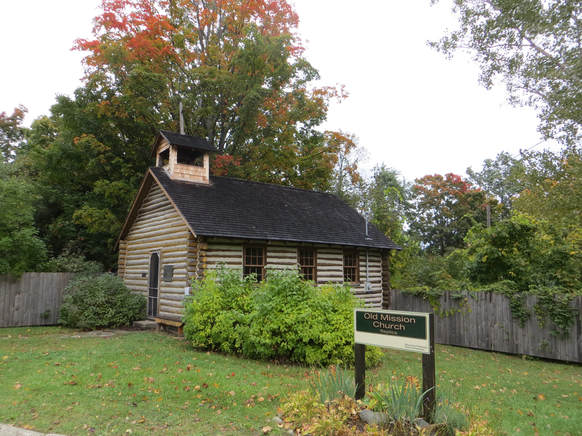 After discussion with the Ottawa and Chippewa, it was decided to place the mission on the Elk Rapids side of East Bay. One log building was completed there before the Native Americans requested Peter Dougherty to move to the Old Mission side of the bay. Peter and the Native Americans built structures for a mission, a church, and a home for Peter on the shore of Old Mission.

According the author Al Barnes, the original log building was moved by the Native Americans from Elk Rapids to Old Mission, piece by piece, and rebuilt as a church. A replica of that church now sits near the original site on land donated in 1939 by Bertha Gilmore. The bell of the of the Old Mission Church was cast from large British pennies donated by the tribal members. On the removal of the mission to Omena, the bell was also transported to Omena.

The Old Mission Betterment Association was reorganized in 1939 for the purpose of rebuilding the old church to commemorate the work and the hardships of the first settlers.

Currently, the Old Mission Peninsula Historical Society has undertaken an update of the displays with the assistance of the Julianne Meyers Fund.
​
The Mission Church display has an important role in introducing residents and visitors to the Peninsula’s unique settlement history, as well introducing the other historical structures and their interlinked story.