(Listed in the Michigan State Register of Historic Sites) 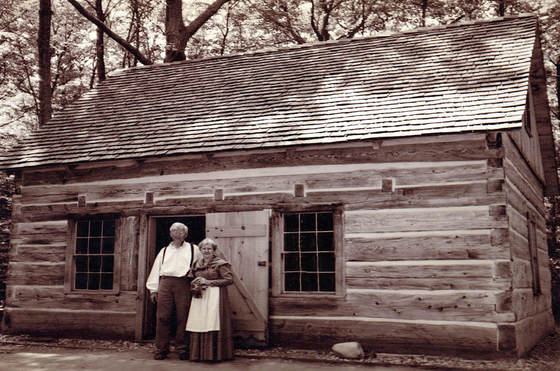 Photo by Carolyn Lewis
The cabin was built sometime between 1854 and 1856 by Joseph and Mary Hessler. He was Canadian, she was born in Ireland and both were in their mid forties when they arrived, probably by small ship out of Mackinaw.

​Although we have no written record as to how Hessler built his cabin, it is obvious from the sheer weight and bulk of the logs that one man could not realistically build such a cabin alone.  Other pioneers lived in the general vicinity including a shinglemaker. At least one pioneer living close by owned some oxen whose formidable strength were often used in the lifting of the logs.  Building materials were scarce so the huge timbers cut from white pine and hemlock trees to provide clearings were hand hewn and stacked on top of each other to form the walls. Dovetailed joints held the comers snugly together without nails or fasteners. Over the course of the ten or so years they lived on the Peninsula, the Hesslers were able to clear sixteen acres which they farmed. They raised corn and wheat, and he fished the waters and collected sugar sap in the spring to make maple syrup. They also had several out buildings and a barn.

​Some of the logs are replacements for the lower logs which had deteriorated over the years. Almost all of the logs on the east end are new to close the gap where a door had been cut through years ago in order to provide access for a bull which was housed in the cabin. The structure was also used during the 1950's and early 1960's as cherry picker's quarters.    When these early pioneers came to the Old Mission Peninsula, none owned their land and were, in actuality, squatters, for these were still Indian lands.  Thus it became important for those foreign born to first become citizens. Hessler's application for citizenship was dated March 18, 1859. In order to open up the sale of these Indian lands, the U.S. Congress passed what is called the Military Bounty Land Act of March 3, 1855. This act gave military land warrants to soldiers who had served in such wars as the War of 1812 or other minor Indian Wars. These warrants could then be sold. In this manner the government came up with a way for the squatters to purchase their lands. Hessler's Land Warrant was numbered 27077 that had been issued in favor of Thomas McCoy who had served in the War of 1812. The date that Hessler received this warrant in the Land Office of Traverse City was June 11, 1859. So one sees why Hessler took such care in March of 1859 to make application to preempt his land and to become a citizen.  The final process for ownership of their 140 acres was to apply for a U.S. Patent Deed. Abraham Lincoln signed Hessler's Patent Deed on August 15, 1861.

Most of these early pioneers arrived in this manner as there were no roads leading to this area at that time. We have no recorded documents as to what these two might have brought with them but the furnishings we have placed in the cabin are accurate to the period and represent the few basic things they might have owned and used. The stove was used for heating although some cooking could be done by utilizing its level top. Often these early pioneers had a small addition or outbuilding where the kitchen was located. The bucket on the bucket bench next to the door was the kind he might have used when collecting sap. The bucket bench was no doubt a necessity for them to place their buckets of water for daily use. Before this cabin was moved here, it was situated about ten miles south along the shore of East Bay. The collecting of water for them was probably not too difficult. Hessler also owned a boat as did most of the early pioneers for it was their primary means of transportation. He probably took his harvested wheat across the bay to Elk Rapids to have it ground into flour. The wheat cradle in the loft was typical of that era.

The dry sink next to the stove was used for washing dishes and possibly for washing clothing during the cold winter months. The three saws hanging on the wall were used in the lumbering era at the turn of the century. The rusted linked chain was also used in the late 1800's by lumbermen to help pull heavy logs. The chain was hand forged. The large rectangular soapstone leaning against the stove was heated then placed under bedcovers for warmth.

Most of the furnishings have been donated by members of the Old Mission Peninsula Historical Society or by members and friends of the community.
​